Ooops just realised how long its been….  sleep has won out over blogging most nights!

The last month has been just cray-cray (oh seriously did I just say that?), as my toddler & I made the massive trek from Tbilisi to Brisbane (Australia) and back, by ourselves, which due to the nature of connecting (or should I say non-connecting) flights, gave us over 12hrs in Dubai both ways.

Toddler was “not-too-bad” on the way out, and since he is still under 2 (just!!) I had booked just one ticket with him as an “infant” (on-my-lap-seat), and used my frequent flyer miles to upgrade the Dubai-Brisbane flight to business class (woooooo!). Now it so happened that the lovely lady sitting next to us moved to give us an extra seat (possibly because toddler was putting the partition between seats up and down, up and down)…. so Bubba had a seat to himself to (not) sleep in. Seriously, I got to watch ONE movie in 14hours and I didn’t sleep at all. Thats how much he didn’t sleep. ONE movie. Seriously, toddler, not cool. I did however get 2 glasses of champagne, and the time he slept was during the dinner service so I got fancy food in peace and quiet (and thats when I watched the movie..)

Had a lovely time in Brisbane, saw loads of friends, used mum’s machine to make a few little gifts for pregnant friends, and the 2.5weeks were over before we knew it, and the dreaded journey home awaited us.

Again, was able to use points to upgrade us to Business class (thanks dad for the 6000 extra points I needed!) and once again somehow had a spare seat next to us. Bubba fell asleep straight away (thanks 9pm departure time and a flat bed seat!) and the 14hour direct flight to Dubai was looking pretty sweet…. I got in 2 movies, dinner and a glass of champagne. Then… we got diverted to Singapore with a cracked windshield (wtf??) and spend 6hours there in the lounge waiting to see how the “heck” we were going to get to Dubai…

The lounge staff eventually got around to us, and were going to put us on the next flight from SIN-Dubai, and told me that because we were an upgrade ticket, they would be putting us in Economy class. I chucked up a stink and refused to go in economy, and they ‘managed’ to put u in Business class. Luckily, as the 2 young girls that ended up sitting next to us in Business class had been upgraded (complimentary) from Economy. Anyway, Bubba fell asleep on my lap again for the most part of the flight.

Dubai… waited at the baggage carousel for 40minutes before realising that one of my bags was definately having a holiday in Singapore. Confirmed by baggage man. Put in missing bag report …Doubtful that it would make our next (non) connecting flight to Tbilisi.

Got massively poo’d on while getting a few supplies at the massively busy Dubai mall. Gross. Got out of there in a hurry!

Flight to Tbilisi, uneventful. Sent bubba running out through the doors to Dadda in Tbilisi Airport while I waited for missing bag to magically appear in Tbilisi. Filled out lost bag report (again) and went home and slept for 2 days straight.

Anyway, have had hardly any time to sew since then….

I did however, begin a muslin Sewaholic Cambie dress (but in pretty scraps of fabric) this week. I did also however, measure myself a little wrong (or read the measurements on the envelope wrong) and made a size 10, where I should have made a size 6. I did try it on a few times before putting the zipper in and thought it would just be a little big. But its MA-HOOOO-SIVE! No way its wearable, I made the View A skirt without pockets, and only lined the top section as I knew it wouldn’t be a wearable dress anyway, so off to the market today to find some gorgeous fabric and make Cambie #2!

I have also started a Simplicity wrap dress in Jersey but overlocker is playing up so it’s a WIP. In saying that, need to fix Overlocker ASAP as I’ve come back from holiday, threads are broken, and something is up with the upper looper thread. The invisible sewing goblin has been at it. Grrr. 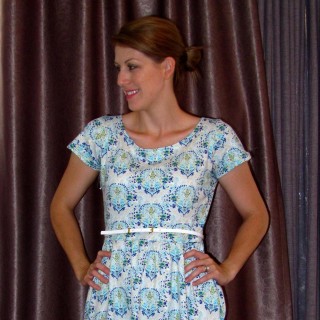 Hi & thanks for visiting me! I'm Jacki, an expat Aussie living in Abu Dhabi.... hanging with my toddler, sewing up a storm and telling you all about it.

😂😂 Oh highpoint plaza...
Super impressed with my Kmart kitchen hack! Playroom was in dire need of an upgrade and the Kmart kitchen did not fit in with the current colours 😂😂 accessories are mainly from Aldi, vinyl adhesive paper (marble & woodgrain) from Kmart, 1 can of spray paint from Bunnings 👌👍👍👍Swipe to see the before!! #kmartkitchenhack #kmart #kmartkitchen #toykitchen #playspiration
Is it Monday already??? Last minute quick mini banana+ blueberry pancakes for school morning tea for 6yo / breakfast for miss 5 months! #breakfast #blw #babyledweaning #blueberrypancakes #schoollunch #mumlife
😍😍 Moments....When you’re watching Saturday morning tv with the kids and look down to see 6yo big brother holding your 5month olds hand ❤️❤️❤️ #mumlife #brotherandsistergoals #bigbrother #babygirl #stillinmypjs

she sews by the seashore...

The Art and Craft of Blogging

A True Taste of Georgia

Always sewing. Sewing Everything. Sharing the Sewing with Everyone

A Letter at a Time
the small sewing room

A personal blog about sewing

Things for Charlie. And also for me.
Justsewtherapeutic

because sewing is cheaper than therapy

A craft and lifestyle blog

a simpler life - with a lot of fabric

The Little Room of Sewing

The goings on in my sewing haven

A tangle of sewing related posts

Adventures of a Subversive Reader
Ginger Jac
This Man's Journey

Home is where our story begins.

The Half Mad Half Marathoner

Crafting in the 21st Century

A Sewing & Knitting Blog, Made in Birmingham, England

Learning to sew on Dad's Singer under Mom's guidance

two sisters and their handmade adventures

Adventures in Life and Style

exhibiting the products of my spare time

A sustainable lifestyle blog with an emphasis on textiles, sewing and clothing!

Creatively Weird... (amongst other things).

Reviving me and timeless techniques with fresh makes

Keep up to date with everything Sew Modern

Made in my living room
Sew Deputy